Be the first to review this product

Button Input Card provides two programmable push buttons for your project. They can be found on the back of the card. These buttons are large by comparing the standard pushbuttons and labelled as A and B.

Button is the most commonly used and intuitive way of signal input, which is widely used in our daily life, such as the button of remote control, the volume button of mobile phone, and doorbell on the door of Garden, etc. Even the clicks in computer interfaces are based on the prototype of buttons. ↓

When using a button, there are two steps, pressing and releasing. Through combination, there can be single click, double click, long press and other operations. So that a button can achieve a variety of signal input. Buttons interact primarily through active presses, but can also monitor a variety of other behaviors, such as collisions.

Button Input Card provides two programmable push buttons for your project. They can be found on the back of the card. These buttons are large enough comparing to the standard push buttons and labelled as A and B. 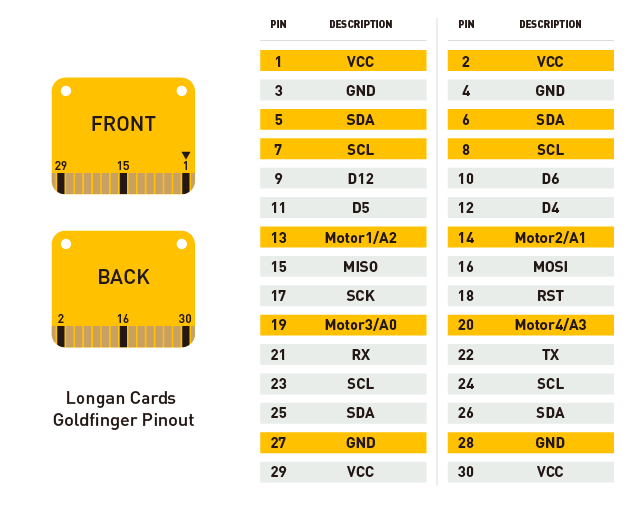 Longan Cards is a unique open-source development platform designed by Longan Labs. As a plug and play development tool, Longan Cards allows you to quickly build wide array of prototypes and applications in no time. A full set of Arduino libraries and plenty of example codes are available to play with Longan Cards system.

↑ Longan Cards system consists of Cards and Boards. There are many gold finger antennas on Card and several gold finger sockets on Board. They are combined together through sockets interpolation, which is intuitive and easy to use. With this unified and flexible interface, you can realize a variety of ideas. Many more Boards with different themes would luanch to help people explore more fun.

↑ Longan Cards modules are classified into many types. Firstly, the main control cards which are the heart of Cards system, run the code and take charge of the exchange of data between modules. Besides Carduino, you can also use MicroBit, Arduino and other development board through connection board. The sensor cards can detect data of surrounding such as temperature and air pressure, etc. The inputs cards allows you to do some operations, such as buttons, knobs, etc. The output cards give feedback in various forms, such as buzzers, motor drives, etc. The communication cards can transmit data in many ways, such as Bluetooth and 4G network. The power cards supply power for electronic projects, including batteries, DC, etc. And other cards, mainly do some auxiliary work, such as expansion, code downloading, etc.

↑ STEM is an acronym for science, technology, engineering, and math. STEM education began in the United States in the 1990s. It is an interdisciplinary teaching method that combines STEM content and real life situations, which helps stimulate students’ original curiosity and thirst for knowledge and novelty. Longan Cards contains dozens of modules, involving a wide range of knowledge in the process of use, including electronic circuit, mechanical structurenature, programming, science of nature, daily wisdom, and humanities, etc. It is a powerful tool for STEM education at fields of electronic prototyping, science experimentation and DIY project.

Reviews
Write Your Own Review